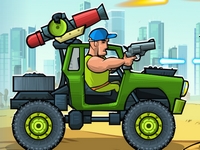 Join Bob against his fight with the aliens. Drive your car, charge your gun and get ready to destroy the bad guys! Use guns, jumps and gadgets to win each of the battles. Mad Day is an wonderful game from our lengthy game listing in friv-7.com. With Mad Day, we've got a large list of Friv 7 games to have fun playing with.

Use Spacebar button to Jump, Use X button to Fire,